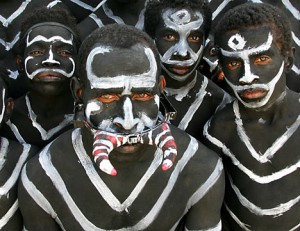 Helga Hewston, roving reporter for Hewdge, writes in from the tiny Pacific island of Erromango, now part of Vanuatu, where recently, the descendants of a British missionary have received a personal apology from the islanders, for having killed and eaten their ancestor, John Williams, as well as fellow missionary, John Harris. Read the full story here: http://www.telegraph.co.uk/news/worldnews/australiaandthepacific/vanuatu/6756656/Tribe-apologises-for-eating-British-missionary.html

The story of the two British missionaries, Williams and Harris was recounted to me as a bed-time story when I was growing up. My mother used to tell me that both men were surly, rotund creatures, who took hours to tenderize. In fact, we have a nursery rhyme she used to sing to me which, roughly translated, goes something like this:

Too much time To tenderize

Go home to your gods

The Erromango islanders, who once had a nasty habit of eating their visitors, still have their own special family recipes handed down from generation to generation. But nowadays, instead of eating people, they are strict vegans and eschew any form of animal products. Why the change? Until recently, the islanders believed their past actions had brought a curse to the tribe.

“We were happy to have the curse lifted”, the village elders stated. Asked what the curse was, they all looked at each other and started crying. The island, now a tropical paradise for tourists, was once famous for its young people developing a mysterious and unsightly skin condition, a white stripe around the neck called a ‘godimanimarki’ or ‘Missionary Collar’, upon reaching puberty.