Roving Reporter, Helga Hewston, interviews Rupert Murdoch’s estranged wife, Wendi Deng and learns more about her shallow infatuation for beleaguered Special Envoy for the Middle East, Tony Blair – a man who has a gold-digger at his feet and a bounty on his head. 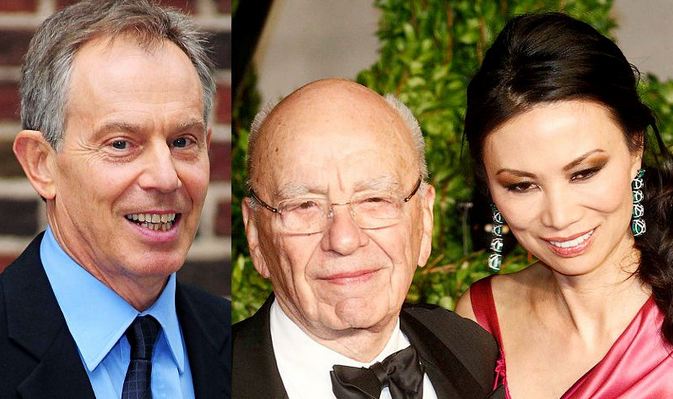 Dear Readers, where on earth, apart from Happy Meadows Rehab, does one have a chance to view the world through the clear glass lens of a smuggled-in gin bottle? And what a world! Sensational stories abound, but this week, one in particular caught my bleary eyes. Yes, the fairy tale legend of Wendi Deng – that gerontophilic ‘Shanghai Lily’ of a woman, who was so obviously schooled in the ancient art of note-writing. Below, is her note, in all its Zen-inspired glory, dedicated to sartorial giant and former UK Prime Minister – Tony Blair:

“Oh, shit, oh, shit.”  “Whatever why I’m so so missing Tony. Because he is so so charming and his clothes are so good. He has such good body and he has really really good legs Butt . . . And he is slim tall and good skin. Pierce blue eyes which I love. Love his eyes. Also I love his power on the stage . . . and what else and what else and what else . . . ”

Dear readers, I have ALWAYS adored gold-diggers, but Wendi D has raised the gold bar unusually high. She also has a solid history of clawing her way to the top by means of sleeping with suspecting older men. But with no hugely discernible age difference between her and Tony, one has to ask: Can it work? I telephone-interview Ms. Deng to ask her about a future without Rupert, and if she would care to elaborate on ‘that note’ she penned to Tony Blair.

Wendi: No, no, you call me Wendi

Helga: Yes, I can see that from your note. Is Tony old enough for you?

Wendi: Why you ask?

Wendi: Why you give me hard time? Did Rupert hack phone?

Helga: And erm, Mrs. Murdoch-Deng dear, what else do you love about Mr. Blair?

Wendi: I so so love he play games. We play ‘You Under Citizen Arrest!’ Hours of fun. When he pretend angry, his pierce blue eyes very sexy.

Helga: Yes. One can only imagine. Thank you, Ms. Deng. Always a pleasure….